On Monday 16th, we released a new version of radare2, the 0.10.0, codename NOLAN. Since you might be a but too lazy to read every single commit, we’re going to highlight some cool new features together!

Thanks to more than 100 contributors who issued more than 2000 commits, here is what changed:

We would like to thanks all contributors, especially the newcomers, that made this release possible. You can find a (hopefully) complete list of them in the AUTHORS file.

Every time someone says the word “radare2”, someone asks about a GUI. Every single time. There are already a lot of different interfaces, some are web-based, some are in Qt, Gtk, tk, … some are public, some are privates, … but not a single one is as powerful as the command line. So for now, the recommended way to use radare2 is, the command line.

Another GUI-tradition is that our great leader pancake writes a new one for each release. This time, it’s implemented on top of the NodeJS r2pipe API and it’s called blessr2 in honor of the bless nodejs api to create beautiful and portable console user interfaces. 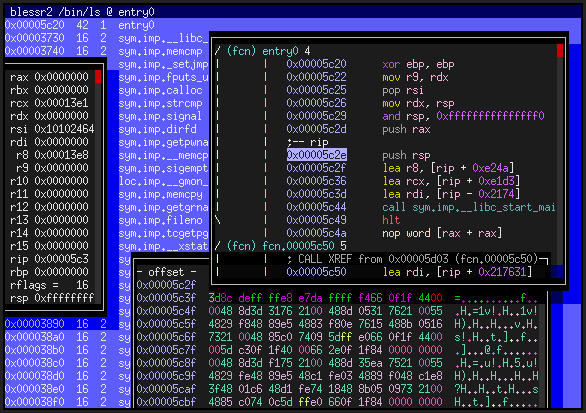 Since it took us a very long time to do this release, he had the time to implement a second one, using Material design, which turns out to be the default one for the Android and FirefoxOS applications.

We spent a lot of time fuzzing radare2, collecting binaries and writing tests to improve radare2’s reliability. We even harvested similar projects bugtracker to see how well radare2 would deal with binary that broke them. Currently, we have something like 2000 tests dedicated to commands, and most of disassemblers have a 100% coverage.

About the testsuite, you may notice that it’s much more quick to run it now. We managed, on travis-ci, to go from 1h30 for only gcc on linux, to 20 minutes for clang on OSX, and gcc+clang on linux. No more excuses for not running the testsuite before a commit.

You might also be happy to know that radare2 now successfully compiles on tcc, the tiny C compiler. This might be useful if you’re compiling radare2 on weird platforms. Please be sure to use tcc from git too :) Moreover, radare2 tries as hard as it can to run on your-super-weird-platform-that-no-ones-has-ever-head-off, we implemented the cp and mv commands, since you might not find those everywhere.

Thanks to revskills for spending time fuzzing and reporting several parts of r2.

Radare2 comes with some new features that will make iOS reverse engineers happy:

ElCapitan users will get a bit pissed of because they are no longer able to debug /bin/ls, because Apple’s SIP will block debugging binaries found in system directories. The solution for this is to copy them into your home :P Also, default installation path has changed from /usr to /usr/local.

This release was supposed to focus on the debugger, fixing many issues, and adding some new bugs features, like: 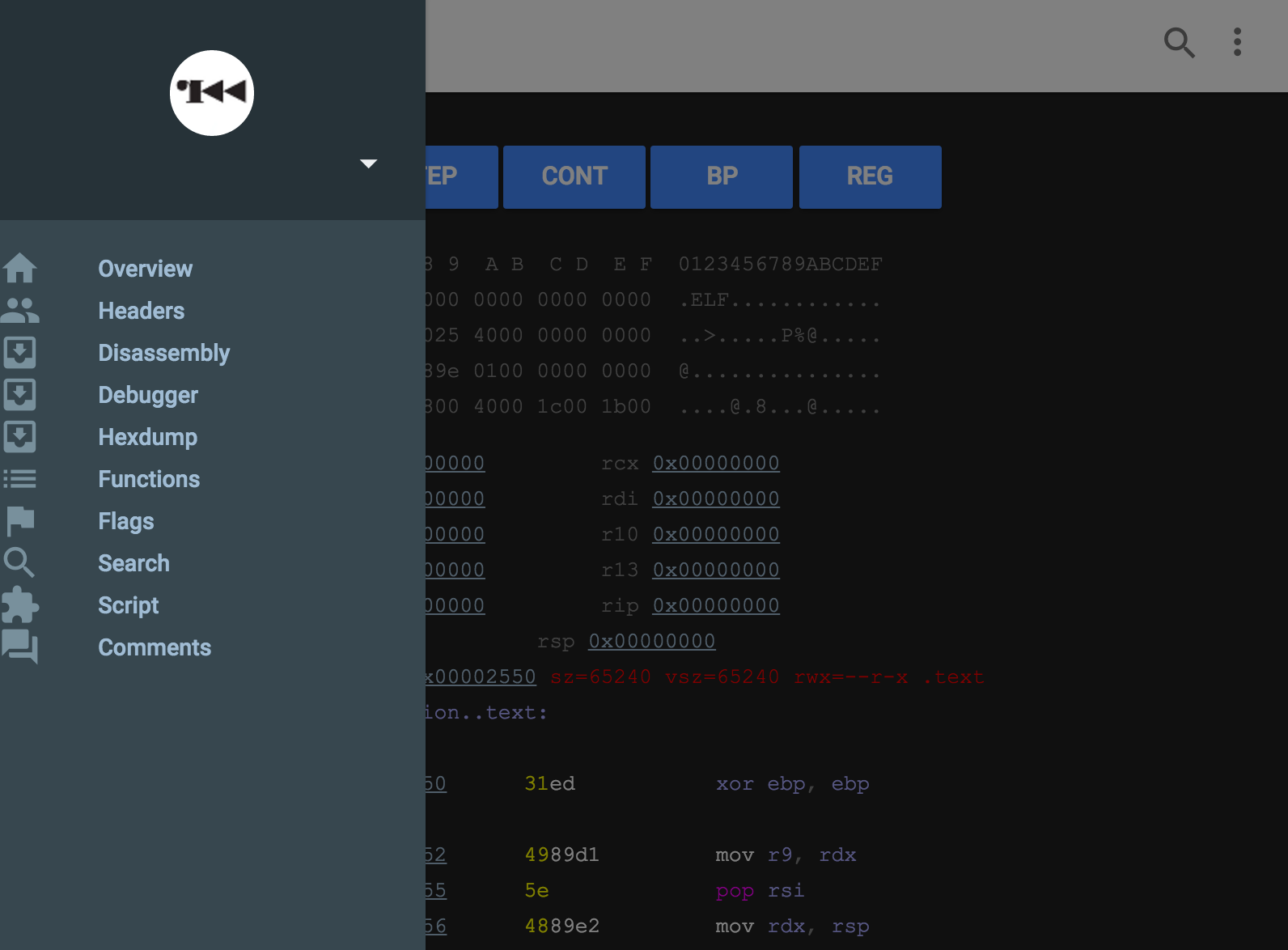 It seems that no one ever took care of radare2 memory consumption before, because it was still lower than its competitors/alternatives. But for this release, radare2 went on a diet : it now consumes 3 to 5 times less memory !

Our beloved ret2libc spent a lot of time rewriting graphs engine from scratch, with overlaps handling and better colours ! See how cool this is: 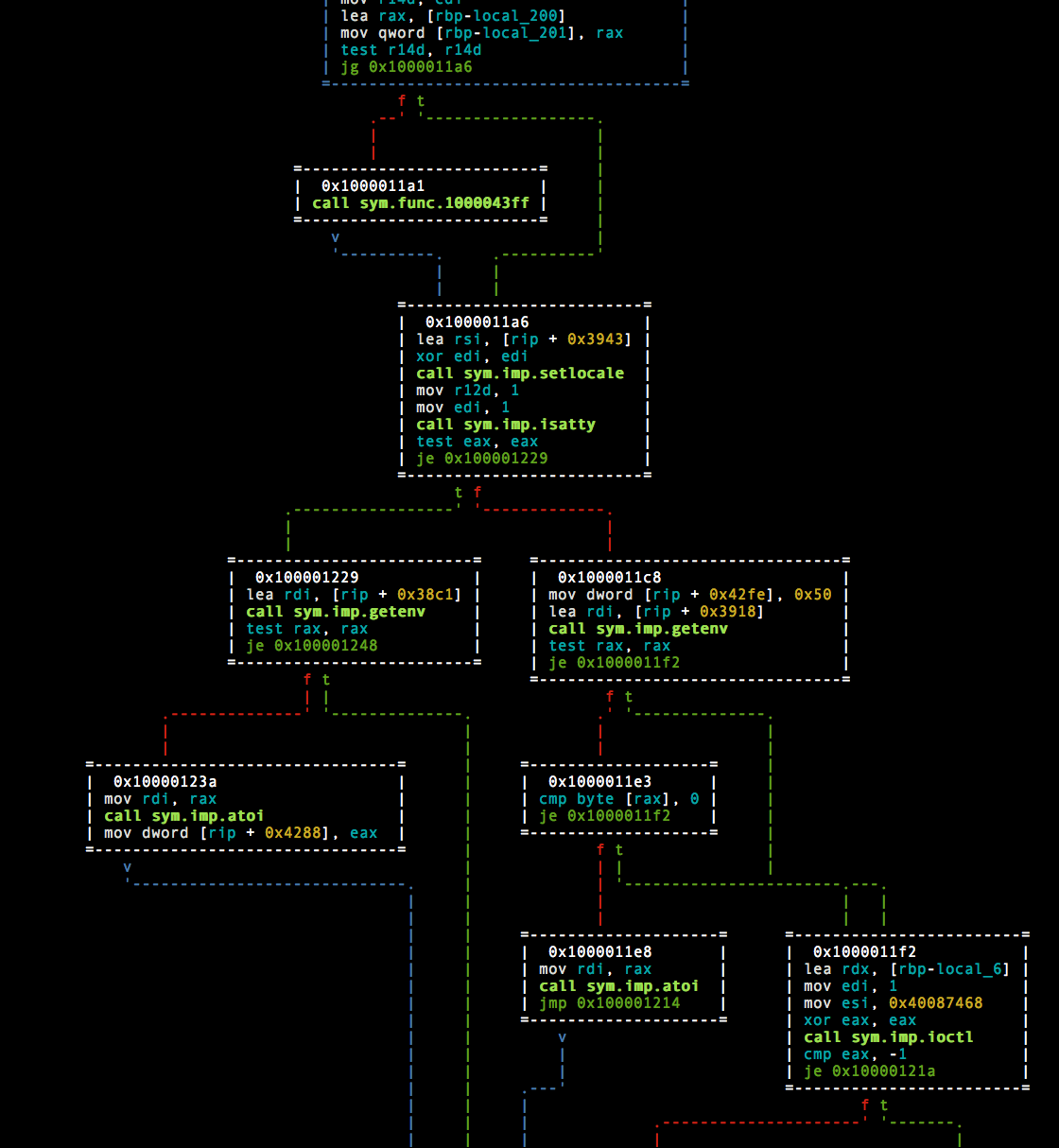 We know a lot of people are using radare2 because it supports a lot of funky/exotic/awful/funny/scary architectures.

Remember when we added support for the famous 6502 cpu in the last release? This time, we added analysis support and opcode description (with ?d), because not everyone is fluent in 6502 assembly code. And even more, since we know some of you just care about the meaning of the code and not the beauty of the assembly listing, we added pseudo-decompiler support. Yes, we have a pseudo-decompiler for 6502.

Did you know that we have a contributor named condret that really likes the pokemon game on gameboy? This is why he’s pushing ESIL, implemented a fancy gameboy disassembler, and for this latest release, he wrote a gameboy assembler! You can now craft your own shellcodes, or, if you’re crazy, games, for gameboy, with radare2.

We also improved AVR support, with analysis (radare2 analysis is generic, so it’s pretty easy to add its support for an architecture), an assembler, ESIL so you can emulate it easily, and description. This led two people (namely Alexander Bolshev and Boris Ryutin) to do worksops at ZeroNights, t2.fi and S4x16 conferences, about reversing and exploiting this architecture with radare2!

And since we have at least one Windows user, we also added support for Windows minidump format, aka mdmp, and windows-on-raspberry2-fileformat-it’s-almost-a-PE because apparently, it’s a real thing.

We have been also working in adding support for more game console ROMs:

Other new binary formats are now supported too:

Remember the bindings, and how much languages we supported? Remember when you had to read radare2’s source code to write a simple one-liner, and ended parsing a call to system with radare2, pipe, sed, pipe, tr, pipe, awk, pipe, sed ? Yeah, us too. This is why we ditched (don’t worry, they are still there, but deprecated) the bindings, and created r2pipe. Since you like so much calling radare2 in system, this is exactly what is does: popping radare2, and piping commands to it.

We don’t have to maintain a shitload of convoluted bindings (have you ever tried to use ffi?), we only have to implement a few commands per languages You don’t have to read radare2’s source code if you don’t want to: if you know how to use radare2, you know how to use r2pipe! Append j to almost every command to get native JSON output! No need to use sed/awk/tr/… anymore!

All r2pipe APIs has been updated to work on Windows, Linux and OSX. In addition, the new native:// URI allows to use r2pipe api using the native C API instead of using pipes or sockets. This allows to reuse the same code but speeding up things a lot.

Radare2 had an implementation of 2048, a port-scanner, and even a secret ascii-penis, but now, it also has a package manager!

No, this is not overkill, stop complaining and keep on reading. Radare2 supports a lot of useless things. This is why we put non-code things into separate packages, that can be browsed/searched/installed/removed/updated with the new tool called r2pm.

Note that r2pm -s will show you every available package.

We managed to remove the last bits of GPL licensed code in radare2! We’re not a complete LGPL project (some modules installable with r2pm have a different licenses, please pay attention to that). This means that you can use radare2 into your proprietary product, while betraying without giving the source to your users, but if you modify radare2, you need to publish the modifications. It might be easier for you to try to upstream them by the way ;)

As usual, we’re going to pretend that every command has now a fancy colored help display, that we checked everything, yada yada yada. The truth is that now, all almost every commands is documented, and the help is coloured.

Also, there is even more autocompletion for commands like pf or t, that were super-tricky to use without.

You might remember hearing a loud noise a couple of months ago. This was when jvoisin was told that to have something like the follow-fork-mode in GDB, he had to find the syscall number for his architecture, break on this breakpoint with the dcs command, then attach to the right process (while having fun figuring which one it is), then continue. Yeah, it was a pretty loud scream. Fortunately, there is now the dbg.forks option for this :)

ESIL is our Intermediary Language, used for emulation, analysis, transformations, trolling, … This is why we added several new commands under ae (Analyse with Esil), like aeip to set the ESIL eip to the current eip, ‘aef’ to emulate an entire function, added ESIL support for new architectures, held workshops, … We even documented ESIL itself within radare2, since you can disassemble to ESIL with e asm.esil = true:

Ho, I almost forgot to mention the new asm.emuwrite, asm.emustr, and asm.emu options! If you set them to true, radare2 will do its very best to improves the analysis with ESIL, but be careful, setting those variables may give you an über-verbose output.

The radare2-extras repository has been growing because some stuff that was previously living in the main repository moved there. It comes now with a configure script and all the makefiles needed to build everything and make r2pm happy.

Some of the most interesting additions are:

A lot of people are talking about unicorn, a CPU emulator. While we think that ESIL is way better for everything and that you totally should use it and contribute to radare2, we added support for it in radare2, it’s as simple as r2 -D unicorn /bin/ls. In fact, since our great leader pancake is great, he added support for it before its release, something like 6 months ago.

Skuater and thePope reverse engineered a crackme that was done on top of a custom virtual machine, so Skuater wrote the asm/anal/emulation plugins for it.

There are now new NodeJS bots for IRC and Telegram, ready to use in the radare2-bindings/r2pipe/nodejs/examples/*.

Yet another successful release of radare2. If you want to join the party, please take a look at our easy issues, we’ll be happy to help you to help us, on irc, or on Telegram.

But more importantly, please, be sure you’ve pulled and rebuilt radare2 from git again, after finishing reading this post. Why? Because we can bet - someone already committed something new in the radare2 repository. Make it a new habit - periodically checking out the newest radare2 git. We can make reverse engineering great again!

Hopefully i’m not missing anyone in the list of contributors. Thank you guys!