This blogpost is the response to an observable fact: People don’t know that Radare2 is using Capstone/Keystone/Unicorn.

This is also a blogpost to address the numerous comparisons done online to these two different components.

Radare2 is using Capstone as its default disassembler since 2014 for arm, m68k, MIPS, PowerPC, SPARC, X86 and XCore.

Radare2 also allows you to use other disassembly engines such as udis for x86 or gnu implementation for arm, MIPS, PowerPC and SPARC.

Radare2 also contains many other architectures that are not supported by Capstone, such as 6502, VAX, RISC-V… (Full list can be obtained using rasm2 -L)

You can use Keystone within Radare2 by installing the Keystone plugin via r2pm, the radare2 package manager. 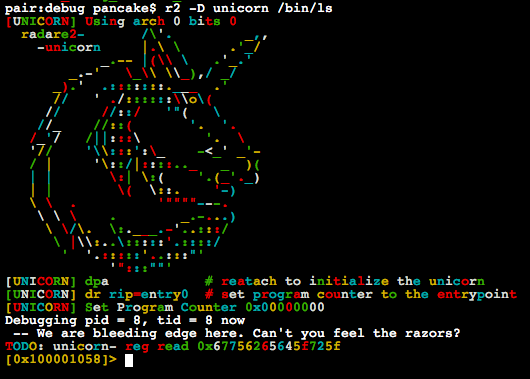 Both of these integrations were available prior to the public release of Keystone and Unicorn Engine.

Why the current comparisons between Radare2 and Capstone are idiotic

So now here are two questions you should ask yourself:

This is how these dumb comparisons would actually look like given all those elements:

As one can notice, this has zero value, and therefore should not be done

One of the comparisons that is often done is between the APIs. Without referring to the previous paragraph.

For this example I am going to show the Capstone API vs R_asm as already presented here vs R2pipe which is the recommended way to script radare2.

(you will need keystone for assembly too)

Comparisons between radare2 and Capstone do not make sense.

So stop doing it.

The APIs, though different, produce the same results as expected. Radare2 will have the advantage though, as additional functionalities such as analysis (cross-references) and debugging for example can be applied to the data coming from Capstone. Additionally, radare2 also provides an embedded disassembler.

It makes more sense to compare radare2’s ESIL engine to the Unicorn Engine, or Udis to Capstone.